Is your child interested in or decided to be a part of the Spelling Bee? Check out these resources.

History of the Bee

How It Came to Bee

The National Spelling Bee was launched by the Louisville, Kentucky, Courier-Journal in 1925. With competitions, cash prizes, and a trip to the nation's capital, the Bee hoped to stimulate "general interest among pupils in a dull subject."

The word "bee" has long been used to describe a busy gathering of people who come together for a special purpose, such as quilting, spinning, logging, or raising a barn. "Spelling bee" in particular is an American term that came into use in the 1870s.

Check out the winning words that made spellers into national champions the past two decades. Then, test your spelling savvy with our spelling quiz! 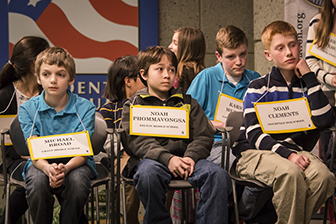 A Timeline of the Grand Rapids Spelling Bee 1977-Today

To help students improve their spelling, increase their vocabularies, learn concepts, and develop correct English usage that will help them all of their lives.

The Spelling Bee started as a competition between Grand Rapids Public Schools and the Catholic and Christian schools within Grand Rapids.

Suburban schools started asking to participate. Kent ISD took over operation of the Spelling Bee as a neutral coordinator, because it did not have its own students competing.

The Grand Rapids Press joined as sponsor, according to Sr. Rosemary, but others think The Press was involved from the very beginning.

The Spelling Bee Committee, with representatives from GRPS, Catholic, Christian, and suburban schools plus GR Press and Kent ISD is established to set policy and run the Greater Grand Rapids Spelling Bee.

Kent ISD and The Grand Rapids Press were principal partners in the Spelling Bee for many years, with the Grand Rapids Press as the primary sponsor, although many area banks provided Savings Bonds as prizes. The Press distributed as many as 30,000 “Paideia” (study booklets) per year to schools in the participating counties.

The Gerald R. Ford Museum became a sponsor and the site of the Greater Grand Rapids Spelling Bee.

Charter Schools and Homeschool Associations begin to participate in the Spelling Bee.

The Greater Grand Rapids Spelling Bee becomes one of the larger bees in the country.

An online option for classroom, grade, school, Regional or even Final Local Bees available for the first time. Greater Grand Rapids Spelling Bee held with a limited audience at Kent Career Technical Center due to closing of Gerald R. Ford Presidential Museum because of Covid-19 Pandemic.

Currently Kent ISD continues to sponsor and coordinate the Spelling Bee with financial and in-kind support from community sponsors and individual donors.